Smart speakers, voice assistants and apps, voice search or V-Commerce: What is the status of voice applications in Germany and how can brands use voice effectively?

52% of German online users are already actively using voice assistants at least once a week via smart speakers, smartphones, tablets, smart TVs and even on game consoles – and by the end of the year, it will be around 60%. This is the conclusion of the third edition of the OMD study “The Age of Voice 3.0”.

This growth compared to the results of the second study edition from 2019 corresponds to an increase of 16%. Voice is becoming more and more of a routine, “every fifth person uses voice control at least daily and is therefore one of the intensive users” says the study. Another 20% of those surveyed stated that they would want to use voice in the near future. 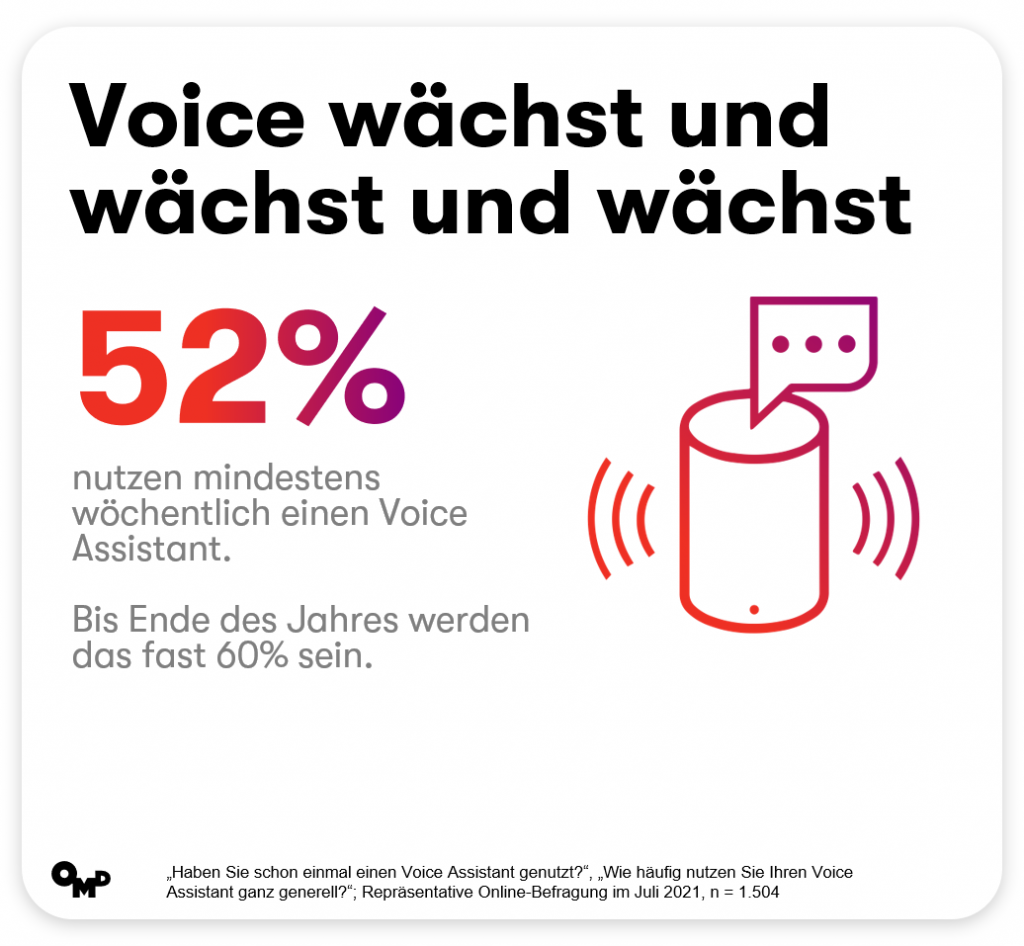 “As the distribution increases, so does the range and potential for voice interactions. Applications that are designed for a broad target group should be as easy to use as possible – because a significant number of voice users are very new to it and still have to get used to the technology”says Lukas Brocks, Deputy Director Brand & Marketing OMD Germany and initiator of the study.

Voice Assistants: Alexa at the forefront

When it comes to choosing the voice assistants, the respondents gave a clear picture: 45% of users rely on Amazon’s Alexa, 24% speak to the Google Assistant and 18% to Apple’s Siri. Bixby (Samsung), Cortana (Microsoft) and Magenta (Telekom) are only used by 4%. 2% and 1% of users, respectively.

Alexa at home, Google and Apple on the go

Where the voice assistant is used differs from the device overall usage. At home, Amazon’s Alexa seems to be the dominant voice assistant and is mainly used as a smart speaker for entertainment purposes or for simple functions such as “set timers” and “call up weather reports ” utilised.

On the go – either in the car, on foot, on a bike or in public transport – Apple and Google are again the preferred voice systems. The focus here is on useful functions such as searching for information or navigating via smartphone.

Voice apps are still in their infancy

So far, less than 60% of those surveyed have activated voice apps on the smart speakers – so they hold considerable potential for brands and those responsible for marketing. So far, there is hardly any interaction (with brands) via language. 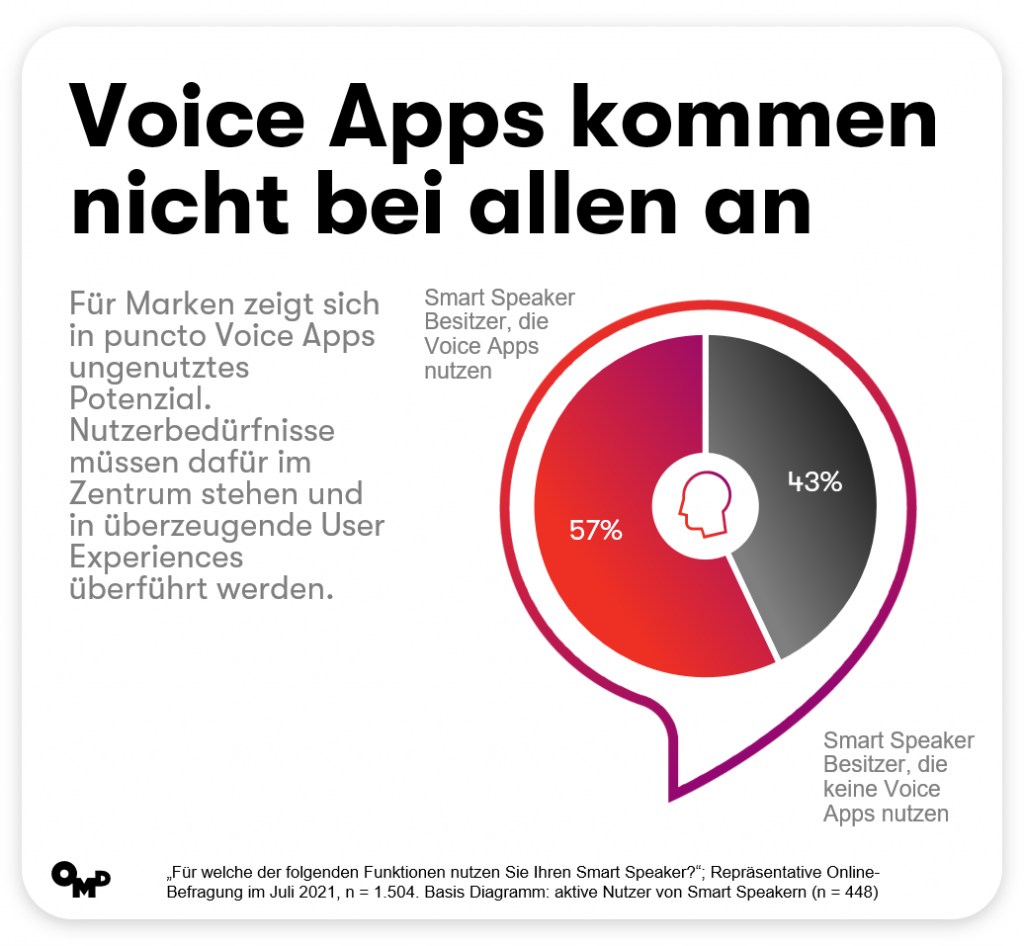 “The comparatively low use of voice apps to date offers brands in particular an opportunity to score points with good user experiences,” says OMD manager Brocks.

Good shopping experiences via voice are still in short supply

A good user experience is also a decisive prerequisite for further developing shopping via voice control. However, “V-Commerce” is still a long way from a boom like e-commerce: Although 12% of those questioned in the current survey have already shopped via voice (this figure was only six percent in 2019), 41% were also not satisfied with the shopping experience and do not want to use voice to shop again.

“Here, too, there is still considerable untapped potential for brands, but sophisticated user guidance is essential in order not to lose consumers,” says Brocks.

Every fifth search query via voice

In addition, the search function via voice is also being used more and more frequently. According to the study, almost every second respondent is an active “voice searcher” and enters search commands via voice at least once a week. Among the active voice users, the figure is as high as 77%.

With regard to search queries, every fifth query in Germany is made via voice control – and the trend is rising. In addition – and this is particularly interesting from a brand’s point of view – 36% of active “voice searchers” search for content at least occasionally after they have had contact with the relevant advertising material. 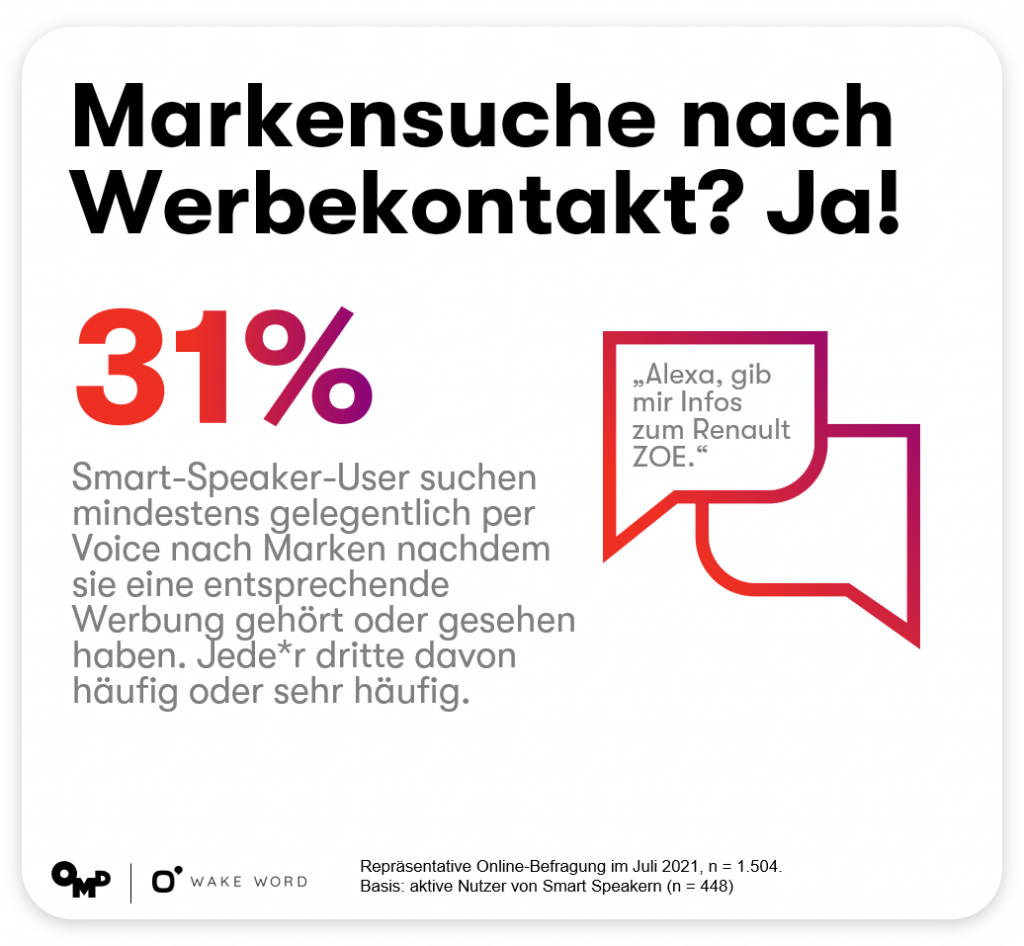 “It turns out that the search via voice control is no longer a pure future scenario, but is already relevant today and will soon represent the majority of search queries. The SEO rules of the game for voice are different, which is why every brand now has to deal with it in order not to fall out of the relevant set of its target group” says study co-initiator Sven Rühlicke from the Wake Word agency.

And how do people feel about voice control after their initial fears of being monitored by smart speakers?

The survey also looked into this question: Although the fear of being monitored by Alexa & Co. is now less pronounced than it was two years ago, the values ​​are still at a relatively high level. 38% of intensive users are “more afraid of surveillance”, 45% of occasional users and 64% of non-users say this.

Brands can strengthen a sense of security

Building trust can therefore become an opportunity for brands with 57% of intensive users and 41% of occasional users stating that they feel more secure with voice control in terms of privacy if the content they access comes from brands they trust. 47% and 43%, respectively, trust brands from everyday life – for example groceries, cars, clothing – more than providers of voice assistants.

“Brands play a central role in the perceived safety of users and can have a positive influence on the natural use of voice experiences,” says Brocks.

Methodology of the study “The Age of Voice 3.0”: The quantitative survey in the online access panel was carried out in July 2021 by OMD and Wake Word among 1504 online users between 18 and 65 years (representative of gender and age).