Originally published by Fuse. Director of Effectiveness, Tom Goodchild, analyses sponsorship of the UEFA Champions League to show how it creates long-term value for brands.

Until recently, the past few months have seen a complete sporting shutdown, which means the loss or postponement of marquee moment for which there is no substitute.

While many have questioned the value of sponsorship during the lockdown, we have analysed sponsorship of the UEFA Champions League (UCL) to show how it creates long-term value for brands to help ride out periodic storms such as Covid-19. Key findings from analysis of 6 UCL sponsors in the UK, coupled with additional European insight, can be summarised as follows:

Until recently, the past few months have seen a complete sporting shutdown. At a commercial level, this has led to revenue shortfalls across a number of industries coupled with reduced inventory for many broadcasters and sponsors.

When it comes to sponsorship, there is no substitute for marquee moments. Unlike spend on traditional media channels (which can be turned off, paused or redeployed), sponsorship wholeheartedly relies on the live match experience which can’t be as easily ‘reallocated’.

While many have questioned the value of sponsorship during the lockdown, this paper emphasises the long-term effectiveness of sponsorship. Specifically, we have analysed sponsorship of the UEFA Champions League (UCL) to show how it can create long-term value for brands and help ride out periodic storms such as Covid-19. In fact, we’ve discovered that these periodic interruptions don’t make much difference to long-term ROI.

The benefits of long-term investment

Marketing budgets often get cut in times of uncertainty. Sponsorship is no exception.

However, evidence suggest that brands can capitalise on the likelihood that their competitor set will freeze and cut investment. Those that do can increase overall share of voice which, in turn, helps drive overall share of market.

In particular, those that invest in brand building initiatives, such as sponsorship acquisition and/or execution, can help deliver long-term business impact.

Proving the impact of the UCL in the UK

By looking at available YouGov brand data across multiple sponsors and audiences, we have been able to approximate the wider brand uplift of UCL sponsorship on the key metrics of its major partners. This is not quite the same as analysing brand side data. However, the same approach and methodology would apply and, in the cases where we have compared both sets, the proportion of brand driven remains relatively stable. Unless the brand side data shows extreme variations, we wouldn’t expect findings to change significantly relative to what features in this paper. While the relative changes between YouGov and client specific data remain relatively stable, there can exist significant differences between sponsors and different sports.

Overall, this approach has enabled us to estimate the longer-term ROI of their respective UCL sponsorships.

Driving brand metrics amongst fans & a focus on consideration versus awareness

The analysis shows that awareness continues to increase amongst UCL fans. This is more telling given that the majority of UCL sponsors are already household names and, as such, we would normally expect the impact to limited.

Of the brands analysed, we identified a 3.2% uplift in awareness amongst fans when compared to the national sample, a relative increase of 3.5%. When expanding this to look at Europe’s top 5 markets, uplifts remain stable with master brand awareness uplifts of sponsors averaging between 2-3% across the remaining markets.

While this is a positive story, it’s unrealistic to expect the partnership to push the dial much further in these areas. As such, sponsors should switch their attention to pushing lower-funnel behaviours.

Once we start to look further down the funnel at metrics such as consideration, we start to see far more significant shifts. We discovered that UCL fans display a 5% increase when compared to national sample. On average, this 5% increase represents a 29% relative uplift amongst UCL fans, presumably from those fans who are aware of the brand sponsoring the tournament.

This suggests that the sponsorship is as effective (if not more) at driving lower funnel metrics than other channels.

Not everyone is a UCL fan and sponsors often choose to sponsor a property that over-indexes with their audience to increase exposure cost effectively.

Using Fuse’s brand linkage methodology across this group of sponsors, we’ve been able to remove this inherent bias. This has enabled us to approximate what proportion of the brand uplift is incremental to the audience and how this is driving the wider brand.

On average, we found that UCL is driving an average 2.2% of overall consideration across the sponsors. While this may sound small on the surface, it’s important to consider the scale of these companies coupled with the reach of the property. All of a sudden, it’s easy to see how effectively the sponsorship pays back, especially because these companies know how uplifts in consideration contribute to sales and overall revenue.

From our own deeper analysis across multiple clients involved in sport, we have discovered that sport sponsorships pay back at an average long-term ROI of £3.4 for every £1 invested. While this varies by sport and industry, our benchmarks enable us to better quantify success and predict the impact for current and prospective partners.

In combination with traditional media ROI approaches we are now able to show the value for money the sponsorship provides as well as the potential business return, this is proving to be a very effective story for our clients.

Brand uplift is a slow build

Like brand advertising, sponsorship takes time to build. It often takes a few years before the benefits peak. While there is an immediate uplift of sponsoring the UCL, we found a significant correlation between the number of years a brand has been a partner and the relative consideration uplift. Interestingly, this relationship is not necessarily linear. While benefits do grow for the first few years, it is between years 4-6 (1-2 sponsorship cycles) where most incremental consideration occurs.

Furthermore, we discovered that the impact of sponsorship is only at 75% of its full impact after 10 years (3-4 cycles). It’s key to note that in this case the impact is cumulative, the longer the brand sponsors the tournament the larger the impact the business will receive each year it is a sponsor, suggesting the sponsorship gets more cost-efficient each year. Those sponsors who have therefore been the longest serving will likely have higher long-term impact being driven by the sponsorship each year. 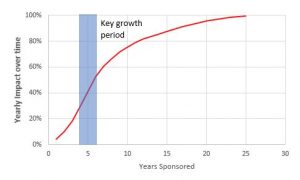 Given how long this impact takes to build, short-term disruption caused by events such as Covid-19 will, in fact, have a relatively small impact on existing sponsors.

Interestingly, previous sponsors’ metrics amongst UCL fans are still high when compared to non-football fans, non-UCL fans and general football audiences. In fact, uplifts amongst fans are still at 60% of the current sponsor average for sponsors that exited 4 years ago. Given the current hiatus in play, we anticipate the speed of the drop-off to decrease (especially as other tournaments and sponsors also aren’t receiving any TV airtime).

While we understand the challenges that come with disruption, evidence suggests that sponsorship is a long-game. Specifically, its impact on master brand consideration (and, by extension, sales) is significant and, perhaps, under-appreciated until now. Overall, this adds to the argument that brands should continue to use sponsorship as a core brand building device which is critical to long-term growth.

A reminder of the key points from our analysis

Fuse is powered by Omnicom Media Group, specializing in partnerships and experiences in sport, entertainment, cause and culture. -Fuse
Fuse specialises in creating inspiring partnerships and experiences that make a difference to the people who share in them and the brands that benefit from them, focused on the things people care passionately about; sport, entertainment, cause and culture.
Back to thoughts