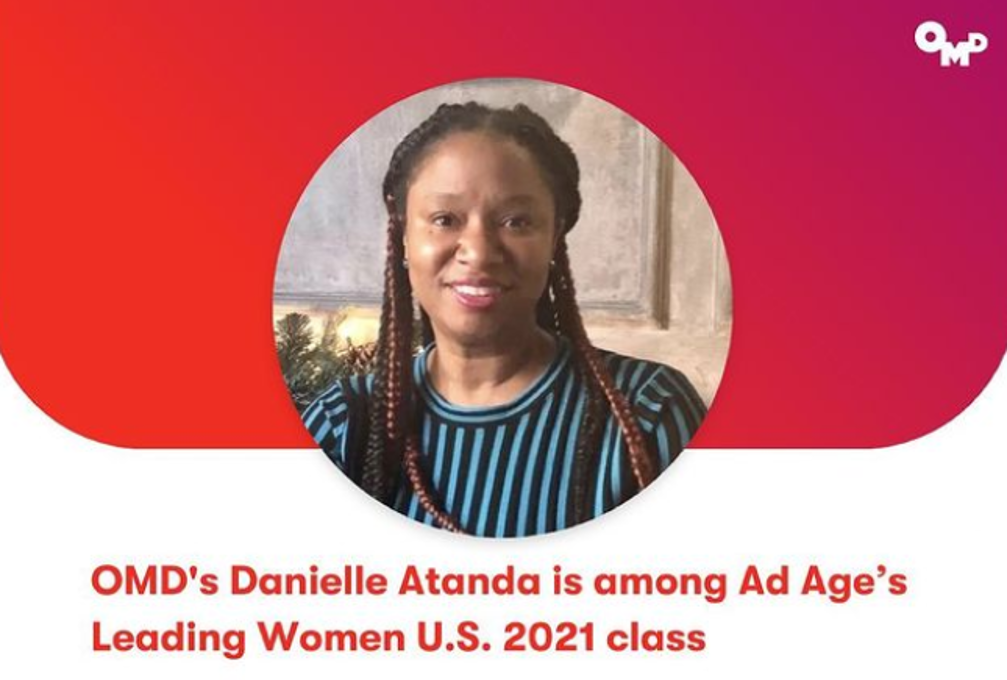 This article was originally published on AdAge.

Danielle Atanda, Managing Director, of The U.S. Army account is among Ad Age’s Leading Women U.S. 2021 class, which is made up of top leaders in advertising, marketing and media who led change during a tumultuous time.

Convincing Gen Z to explore joining the U.S. Army may sound like a hard sell, but Danielle Atanda knows how to problem-solve. “While Gen Z definitely has an awareness of the Army, there is very little knowledge on the breadth and the depth of the Army,” says Atanda, managing director of the branch’s creative account at OMD. Her goal has been to drive awareness about the possibilities that enlisting offers: “There is something that fits everyone,” she says.

From retooling the Army’s media mix (to de-emphasize linear TV) to designing a career-matching tool on the Army’s website, Atanda’s strategic approach has not gone unnoticed—the branch has consistently hit its annual recruitment targets since tapping OMD. Even during the pandemic, quick pivoting of investments toward gaming, esports, online and social helped the Army account stay in good standing.

What advice would you give your younger self?

Always know that you earn and you deserve your position or award. The reason I say that is, as I’m mentoring other African-Americans, they may not acknowledge the hard work they have done to get to their position. When you recognize that you’ve earned what you have, you move differently and you have a different confidence.

Leaving my hometown of New Orleans, where I knew I had a guaranteed job, to move to Chicago. For grad school, I had to do a master’s thesis at Edelman, and two weeks in they offered me a job. People would say, “Oh, you don’t know anyone in Chicago,” “Oh, you’ll never survive the winter”—there were so many reasons for why I shouldn’t. Well, 20 years later, I’m still here.

If you weren’t doing your current job what would you be doing and why?

It would have to be something in journalism. In college, I worked at a few of the local newspapers and I’d probably be doing something more community journalism-oriented.

What should the industry do to encourage more women and people of color into its ranks?

We need to think about the pipeline for entry-level positions. For women and people of color, when they see people who look like them at the top, they know they can get to the top.

Which campaign or other piece of work have you seen in the last year that you wish you had done?

I would say looking at the different activations from COVID, I really liked some things at a localized level. Like, billboards around a dentist’s office saying that now is a great time to get braces because you hide them with a mask. I remember driving by on the highway and thinking, “How many people has that billboard driven?”

OMD remains most medaled media agency at Cannes with 38 Lions

Attention: How far away is it from becoming the ad industry’s currency?

Signals of change: considering the change in consumer lifestyle habits