As the dust begins to settle after this year’s Double 11 event (also known as Single’s Day, taking place on 11th November annually), the world’s biggest shopping event continues to make headlines for the new records it set and highs it reached. OMD China takes a closer look behind the numbers to examine some of the key trends and behaviours in play this year, and the implications for advertisers and agencies looking ahead to 2020.

Ever since its launch, the Double 11 shopping bonanza has continued to grow year on year, accounting for 1.65% of China’s GDP in 2018. In 2019, it took just 1 minute and 36 seconds for Tmall’s Double 11 event to sell 10 Billion RMB (USD 1.42 billion). However, this year’s success didn’t just arise from the significant discounts and unbelievable deals that have become synonymous with the event since Jack Ma’s Alibaba introduced it back in 2009.

In fact, a survey conducted by Alibaba found that the number of respondents who don’t intend to participate in the event increased from 1% in 2018 to 8% in 2019. This reflects a change in consumer sentiment towards price-driven bargains, in favour of quality and value-driven purchases instead, as the population becomes increasingly affluent. In other words, deeply discounted deals are not enough to attract all consumers to spend on Double 11. Therefore, the challenge for eCommerce platforms during this year’s event was combatting this lack of interest in order to continue driving growth.

Here’s how they managed to do it, leveraging game mechanics to drive increasing consumerism this past Double 11:

Alibaba created a mini game (Your Tmall Store) within their Tmall app to get those non-deal sensitive consumers to turn gaming into purchasing. They leveraged simple game mechanics – such as upgrading bonuses, daily quests and a thorough reward system, which included small monetary wins to big prizes – in order to create a habit loop. Not only did it get people opening the app every day to complete a series of “quests”, it also gave people a reason to purchase on the day with their accumulated hongbaos (customary red envelopes, used for giving cash) collected from playing the mini games. 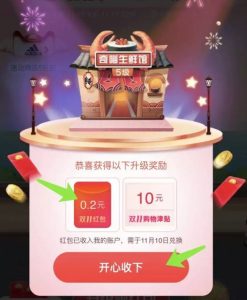 Whether it is the new kid on the block, Ping Duo Duo, or a well-established player like Tmall, everyone realised the importance of consumer recruitment through their friends and family, incentivising them with real cash prizes or coupons. Everyone loves to give a helping hand, and some even made a profit out of it. The Tmall mini game created a micro-economy whereby players sold their high-level stores so that during the daily player vs. player events, they could pay their way to win and receive higher value hongbaos. 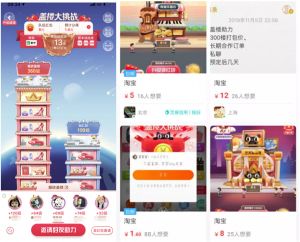 Tmall’s mini game allows players to team up with their social circle in competitions or even buy help to win higher value prizes.

Additionally, this route was also a strategic play by Alibaba and PingDuoDuo to infiltrate WeChat, a competitive ecosystem owned by Tencent, without spending on paid media. As consumers shared Tmall links on WeChat, Alibaba could track the success of the platform in recruiting new users or enhancing its commercial activity.

Typically used in role-playing games (RPG) to support freemium models, loot boxes are virtual giftboxes that present a randomised selection of further virtual merchandise. During this year’s Double 11 event, brands also adopted this game mechanic to eliminate entry barriers and showcase their product portfolios, in the hopes that at least one product would stick (see the Chando example below). This tactic isn’t just effective for small ticket items though, eCommerce platform TLC used it to incentivise pre-orders prior to Double 11 by offering people the chance to win an upgrade of their purchase.

The ‘game of chance’ offered by loot boxes are particularly favoured by Gen Z consumers, with local toy maker, PopMart, kickstarting the “blind box” phenomenon in 2018. As part of their Double 11 promotions this year, PopMart offered buyers of their blind-box toys the chance to open them virtually and immediately see which toy they drew. This further fed consumers’ curiosity and therefore, repeat-purchase behaviours – selling out their Double 11 limited edition toy in just 9 seconds.

The lessons we can draw from this year’s shopping bonanza relate to the value exchange we now need to offer consumers for them to not only engage with our brands, but actually bring us closer together:

Moving forward, as Double 11 continues to grow in volume and geography, brands will need to start looking at new tactics – as they did with gamification this year – to ensure they continue receiving a share of the world’s biggest shopping event.

-Mimi Lu
Mimi is Head of Strategy at OMD Shanghai.
Back to thoughts

How 2020 changed the way we work, to deliver better business outcomes

SXSW 2021: Looking through the Lens of Commerce

OMD Australia CEO Aimee Buchanan: “It made me look at our industry”