Go back
OMG and Yahoo: When Consumers Pay Attention To Ads, When They Don’t
OMD EMEA
EMEA OMD EMEA

Omnicom Media Group (OMG), Yahoo and Amplified Intelligence released a study Thursday that focuses on identifying when consumers pay attention to ads — and when they don’t.

Findings from the research conducted across Yahoo’s digital properties showed that 53% of all ad formats studied met viewability standards, but achieved less than 1 second of active attention.

The study shows that viewability and attention are not the same. The research shows how viewability is device-driven — determined by how and where the ad gets loaded on the screen — while attention is human-driven by how the viewer responds to the ad served on the screen. 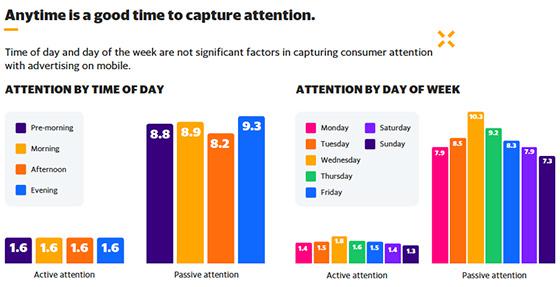 All respondents for the study were recruited, and volunteered. Amplified Intelligence’s technology collected the data using facial footage from phone cameras and metadata on viewability, scroll patterns, sound and phone orientation.

Altogether, responses to 128,000 mobile web advertisements were categorized into three levels of attention such as active, eyes on the ad; passive, eyes on screen, not on ad; and non-eyes, eyes not on screen or ad.

Research was conducted in the U.S., Canada, the United Kingdom, and Australia.

Elizabeth Herbst-Brady, head of global revenue and client solutions at Yahoo, believes the findings from the study reveal the nuances of consumer attention. It requires combining the right formats in the right environment and context relevant to each audience.The research shows how behavior evolves to enable more engaging experiences.

Whether or not a consumer pays attention impacts a brand’s growth. By paying attention to a message, the person retains the message, and the marketer can use the data to grow the brand. If the person doesn’t pay attention, the opposite occurs.

The human is the “ultimate variable,” because it’s impossible to know what is ignored and what gets the focus. A person only has so much attention to give. There is only so much information a person can take in through their eyes.

The data shows that there are four types of content and ad formats that keep eyes on ads and screens in a mobile web environment. These include immersive, high-impact, short, and big.

Marketers should try to gain at least 2.5 seconds of active attention. Interscroller ads were found to keep the attention of participants for about 3.3 seconds, video interscrollers about 3 seconds, and native video ads about 2.8 seconds.

Many factors drive attention, and no single factor is responsible for the best result. The active attention given to the ad is influenced by the ad format as well as the category.

Amplified Intelligence founder and CEO Karen Nelson-Field believes the work adds to the growing body of evidence showing that getting the attention of consumers is neither a commodity nor a currency. She referred to it as a “highly nuanced metric that enables more effective creative, planning and buying strategies, and decisions.”